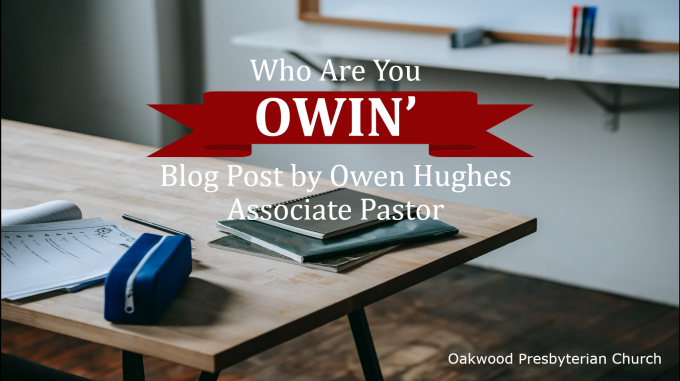 Over the last few weeks, I have been reflecting on friendship. I am going through a book called “Disciplines of a Godly Man,” by R. Kent Hughes (no relation) with a group of guys. Early on in the book Hughes has a chapter on the discipline of friendship. In the chapter, he exhorts men to have deep friendships, like that of Jonathan and David in the Bible. Friendships that are built on something more than just “doing stuff together,” but instead are marked by loyalty, honesty, and genuine love. Friendships that are forged over time, that are built on trust, and with people who are willing to get in the trenches with you. My pastor in Florida used to call these friends, “pallbearer friends,” the people who will carry your coffin (sounds a bit morbid, but you know what he’s saying). As I reflected on what it means to have a friend and to be a friend, my memories rested on one guy who showed me what real friendship looks and feels like.

Joel came to Whitinsville Christian School in sixth grade. As I have mentioned in a previous post, I had a learning disability in elementary school, but by fifth grade I was able to read. Once that happened, I took off like a rocket, academically that is. I was in the top three in the class. I worked hard to stay in that position and was very proud. When Joel came, I was bumped to fourth in the class because Joel was “wicked smart” (Whitinsville is in Massachusetts, if I haven’t said that yet).

Joel started off as a rival, a threat, an enemy, someone that needed to be destroyed, but Joel was a lot bigger, stronger, smarter, and faster than me. I was funnier, but funny guys rarely destroy strong guys. So, I decided it would be a better idea for me to befriend Joel. It was the right decision. Joel and I became very close, especially as we entered junior high. I got bullied in 7th grade and I told you how that translated into me becoming a bully in 8th grade. Joel was not bullied, nor was he a bully himself. Joel was kind, but his kindness didn’t mean weakness. In fact, his kindness was shown through his loyalty and he would stick up for his friends, even if that meant getting physical.

Here is the story. There was another family that we used to carpool to school with when I was in junior high. The boy from the carpool was in my grade. He was quiet and a bit strange. One day at recess (all good stories happen at recess…we should have more recesses) we were playing “hit the bat” (I can explain it to you if you don’t know what it is. I literally have never seen kids play this game other than when I was a kid, so who knows if it is a real game). Anyway, this boy walked right up to me, unprovoked, and said something very derogatory about my sister. I was completely stunned. I lived a pretty sheltered life and certainly had never heard that word in connection with my sister. I just stood there, then, out of nowhere Joel appeared and clobbered this boy on the back of his head and put him on the ground.

Joel said, “No one says that about my friends.” Now Joel wasn’t particularly friends with my sister, but I think you get the picture.

Perhaps Joel overreacted. Some of you might be appalled by this behavior, but I remember a wave of warmth coming over me. In fact, when I replay the scenario in my mind’s eye now, I get that warm feeling again.

He has told you, O man, what is good;
and what does the Lord require of you
but to do justice, and to love kindness,
and to walk humbly with your God?

“To do justice and to love kindness” are requirements that God has for us to carry out to other humans. The word kindness in Hebrew is hesed which literally means loyalty; “love loyalty,” I remember asking a mentor, who was a VP at a tech company in Florida, what he looked for in new hires. He said, “I used to look for competency, but after pouring into new employees, only for them to leave because of a better offer from another company, I decided to look for loyalty.” As a friend, I think it is the highest quality.

I first experienced that quality in Joel and I am forever thankful to him. I remember another time, as an adult when I was sitting in church after a weekend when I made several bad decisions, feeling the weight of my sin when the pastor read from Galatians 2:20. At the end of that passage it says, “And the life I now live in the flesh I live by faith in the Son of God, who loved me and gave himself for me.” That’s loyalty. That’s a friend of sinners. That’s my friend Jesus. I felt that warm feeling of friendship once again.

So who has been a friend to you? I would love to hear who you are owin’.