Cam Smith is the Reformed University Fellowship Campus Minister at Penn State University. Cam grew up in Wyalusing, Pennsylvania and graduated from Penn State in 2008. Both he and his wife became Christians through RUF at their respective colleges. His wife Kaela grew up in Bradenton, FL and the two met halfway in the state of South Carolina. At that time Kaela was a student at Erskine College where Cam was an RUF intern. They spent their first years of marriage in Saint Louis, MO while Cam attended Covenant Seminary (2010-2013). They have three children Zoe (b. 2013), Lucy (b. 2015), and Penn (b. 2019). Cam served as the RUF campus minister at Carson-Newman from 2014-2019. Cam started at Penn State in 2019. 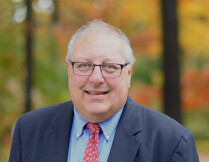 Richard Smith is the Reformed University Fellowship-International (RUF-I) Campus Minister at Penn State University. Richard grew up in Rock Hill, South Carolina, and attended the Westminster Presbyterian Church. In 1977 he started college at Winthrop College in Rock Hill and was involved with IVCF where he grew in the Lord and led a small group for three years; RUF was not there yet. He received a degree in Production Management in 1981, and was called to the ministry in 1981 at Urbana. He started seminary at Reformed Theological Seminary in Jackson in 1983 and graduated with a Masters of Divinity in 1987.

Since then he has served three churches: Covenant Presbyterian in Fayetteville, Georgia as Associate Pastor (9 years); First Presbyterian in Florala, Alabama (4 years); and Northgate Presbyterian in Albany, Georgia (15 years). In the last 8 years he has led Northgate's International Ministry at Darton College, where he ministered to over 60 students every year. A year ago he and his wife, Lynne, started the process to join RUF-I, and he has just started a new RUF-I chapter at Penn State ministering to International students. Penn State has 45,000 students of which 8,400 are Internationals. Richard met his wife Lynne at Ridge Haven Conference Center in 1989 and they were married in 1990. They have two children, Rick and Evelyn. Richard enjoys reading, sports, gardening, people and exploring places of history.  Click HERE for more information about RUF-I.

Tim Yates serves with Friends of the Chinese Reformed Theological Seminary (Friends of CRTS) in Taipei, Taiwan (www.friendsofcrts.org). Friends of CRTS is a US non-profit organization that supports Chinese Reformed Theological Seminaries (CRTS). Friends of CRTS is governed by a Board of Directors which is fully committed to the reformed faith as expressed by the Westminster Confession of Faith. As required by our bylaws, a majority of Board members are Pastors and Elders in the PCA. The Board of Directors decides which missionary teachers and special projects to support, and sets financial policies. They appoint an executive director who oversees the daily affairs of Friends of CRTS. Tim and his wife Barbara have seven children: Valerie, Natalie, Jonathan, Janine, Karen, Trisha and Nathan.