The Liturgy of Mickey Mouse 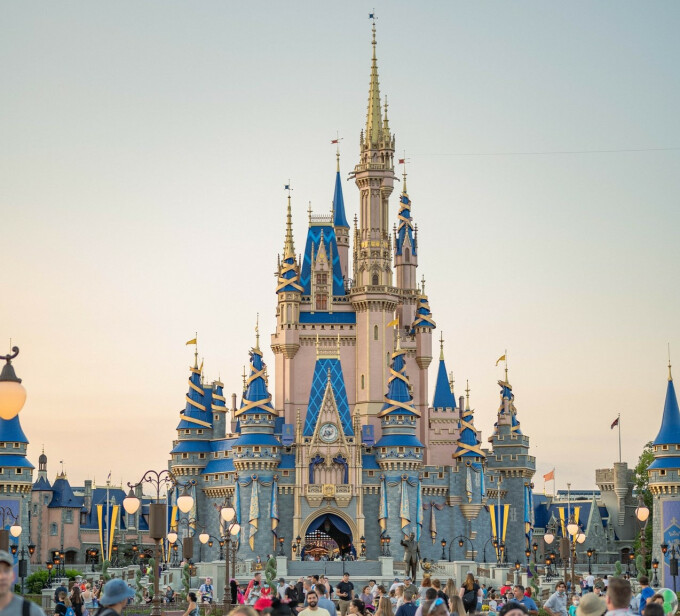 Earlier this year Maggie and I took our boys down to Disney World’s Magic Kingdom for a couple of days in February. And I have to tell you, it was awesome! It’s hard to describe the joy that comes to a parent when your kid’s eyes light up as you first drive beneath the Disney arch at the entrance to the complex and see Cinderella’s Castle for the first time. We made some great memories on Goofy’s Barnstormer and The Many Adventures of Winnie the Pooh. I’ll never forget when our oldest son, Graeme, bowed when he met Cinderella, or when Haddon got to be the pilot of the Millennium Falcon on Smuggler’s Run, or when Teddy met his hero, Buzz Lightyear. At the end of those two days, the magic had worked and we were tired (and broke), but filled with happiness.

I’ve been to Disney World a few times now over the years, and each time I leave wanting to go back. But the more I go to Disney World one thing has become glaringly obvious to me. It’s something that leaves me with uncomfortable misgivings that are hard to shake. The more I’ve been to Disney, the more I’ve come to realize that Disney World is inherently religious. If you look at it closely everything about Disney, from the park’s design down even to the rides, is religious in nature. When you walk through Disney’s gate onto Main Street USA you are entering into a liturgy purposefully designed to catechize you into the gospel according to Disney. I’ve dubbed it The Liturgy of Mickey Mouse. Let me explain.

Disney’s gospel is not really hard to spot. In fact, I bet if you’ve seen a Disney movie or two you probably already know what it is, even if you’ve never heard it called a “gospel” before. But a gospel it is. You hear it right away in the park’s motto. Disney is “the happiest place on earth.” Disney understands that the world is a dark and broken place filled with suffering and evil, and it offers a vision of the good life meant to combat the world’s (and our) brokenness: a life filled with happiness. Disney World is a Mecca where weary pilgrims will be instructed in the ways of true happiness. As pilgrims participate in Disney’s liturgy they hear the good news that, as their 50th Anniversary theme song states, “Doesn’t matter where you are / ‘cos the spark is in your heart / wherever you go you can have it / ‘cos you are the magic…Just believe it and close your eyes.” “Hear the words of Walt Disney and believe,” their heralds proclaim. “The answer to evil and suffering is inside of you. You are the magic that will give your life meaning and happiness.”

The religious character of Disney World is what philosopher James KA Smith calls a “cultural liturgy.” Cultural liturgies are the rituals and practices we participate in that form something in us, and Disney has perfected this liturgical art.

Consider the many rituals and practices of Disney World. As pilgrims approach the sanctuary, I mean park, they make an offering that purchases their entrance and right to worship. Then they journey down Main Street past the primary alter, Cinderella’s Castle, where they prepare their hearts for the day’s activities. It’s Disney’s holy of holies wherein only the select few may enter. The average worshipper is kept well back from the inner sanctum of that sacred space. From there the faithful proceed to various auxiliary alters, each attended by acolytes and altar servers, where they venerate the icons, not of gods (the participant is god at Disney). Here they venerate Disney’s Saints such as Peter Pan and Mickey Mouse from whom they may learn the habits of happiness: let your heart guide the way, follow your dreams, and so on. Throughout the day these icons pass by in processional parades singing the songs of the faithful. After venerating an icon a pilgrim may enjoy a ride like “It’s A Small World” which gives them a vision of what a world filled with happy people would be like. Remember that final room in the Small World ride where everyone is dressed in white and no longer living in distinct communities, but are together as one people? It’s the Disney vision of a new heaven and earth. Pilgrims may opt to participate in one of Disney’s many sacraments, like a stop in at the Bibbidi Bobbidi Boutique where catechumen dress in the garb of their most revered icons. Finally, at the end of the day worshippers gather together back at the Castle for a corporate service filled with fireworks and lights shows where the gospel according to Disney is proclaimed as the congregation sings with one voice: “Let your heart guide the way / And all your dreams will follow / Doesn’t matter where you are / ‘Cos the spark is in your heart.” Worshippers are then sent out of Magic Kingdom back to their homes to spread the gospel according to Disney World in Orlando and to the ends of the earth.

Yes indeed. Disney World is an inherently religious place with a liturgy designed to catechize us into its gospel. It’s not just Magic Kingdom. It is another kind of kingdom, a competing kingdom: the kingdom of the god of self and Mickey Mouse, its messiah. Mickey isn’t just the conductor of Mickey’s PhilharMagic. He is the prophet, priest, and king of Disney’s gospel.

You may wonder why I decided to write this blog. Depending on the tone you caught as you read those paragraphs you may have interpreted them as a curmudgeonly take on a theme park, or maybe as a joke. I can assure you they are neither. I decided during our Disney trip that I wanted to write about this not to come down on Disney, but to point out how the world is constantly trying to form us. It’s constantly pointing us toward some vision of the good life it believes we ought to pursue. And Disney’s vision is powerful. They have, perhaps better than any other organization in the world, captured the spirit of the age. The human heart loves to believe it is the source of its happiness and the answer to its problems.

The news coming out of Disney World in recent weeks, however, made me think more deeply about the formative power of Disney’s liturgy. Businesses like Disney have made no secret in recent years of their support for the LGBT agenda, but the passage of Florida’s “Parental Rights in Education” bill led to a promise from Disney both to push for the bill’s repeal, and to fast track the LBGT agenda in its children’s programming.

Here’s why this matters: the logic of Disney’s gospel (the magic is in you) inevitably leads to the rejection of Biblical ethics. If a child believes the answer to her problems is inside of herself, then she will pursue what is inside of her, whether it’s fulfilling a disordered sexual desire, or changing her name and taking cross-sex hormones in an attempt to find happiness as a boy. Imagine then the significance of the Disney executive who recently pledged to incorporate more LBGT characters in movies. This is ultimately what Disney wants to catechize us, and specifically our children, into. They are trying to make disciples, just not Christian ones.

How then should we interact with Disney? Just as happened many years ago, I’ve heard of Christians who’ve vowed to cancel their Disney+ subscriptions and never to go to Disney World again. That is a legitimate option. Who knows? If Disney’s embrace of this false gospel becomes so obvious to the point that my kids can’t watch a show or be in Disney World without being force-fed that gospel, maybe that’s where I’ll land. But I think a more measured response is also appropriate. I hope to take my kids to Disney World again someday, and I’m sure we will watch new Disney movies. But I’m doing it with my eyes wide open. If we are going to go to Disney or participate in any cultural liturgy, we must understand what is happening. You cannot go to Disney under the illusion that Disney just wants you to relive 1900s Americana when you walk down Main Street USA. It’s not a spiritually or morally neutral place. We are not wrestling against flesh and blood here. They are trying to preach to you, and if you are not careful to observe what is happening, you, and maybe your children, will be discipled right into the spirit of the age.

If you are going to do what I’ll probably do in a few years and go pretend to be a Jedi on The Rise of the Resistance, then you need to be ready to point out those cultural liturgies and other gospels. Then you need to show why Jesus is better. Learn to dissect the messages contained in Frozen and Elena of Avalor and give your kids (and your own heart) a gospel that far surpasses what Disney has to offer. It’s a gospel that points us not inside, but out to the person and work of Jesus who by his life, death, and resurrection has won the battle over evil, suffering, and even sin and death. Through him all those who believe will live forever in perfect peace, not in “the happiest place on earth,” but in the happiest earth – a new heaven and earth completely remade in perfection and glory.

When it comes down to it, it’s not going to be merely avoiding Disney or anything else that keeps you and your kids from embracing the spirit of the age. It can only be Jesus. What we need more than to avoid secularism is to catechize our own children into the gospel of Jesus. We need to participate in our own liturgy of corporate worship wherein we receive God’s ordinary means of grace (the Word, prayer, and sacraments) that work to form Christ in us, and us in Him. Then and only then can we find something outside of this world to be the Mecca of true happiness: that place where Christ is seated at the right hand of God.

Posted by Rev. Ben Lee with
(Login/Register to leave a comment)