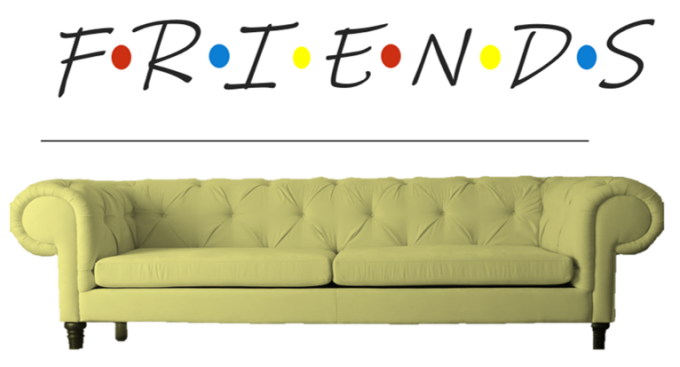 I’m known for not liking movies that make me sad. I don’t want to watch something that makes me carry around emotional baggage for days on end. That’s not entertaining. It’s depressing, and I don’t want to be depressed. And I almost never watch these kinds of movies. Ain’t gonna happen.

But then it happened. Over the weekend I broke my cardinal rule and watched a show I knew would leave my heart a jumbled-up mess. On Saturday my wife and I sat down to watch the recently vaunted Friends: The Reunion. If you’ve not heard about it, the show gathered together a vast host of people involved in writing and producing the beloved sitcom that ran for 10 years until its final episode in 2004, most notably the six actors and actresses who were the show’s main characters. And true to form by the end of The Reunion I was, as my wife remarked, all up in my feelings (just as I was, FYI, during the final episode back in 2004).

I couldn’t help it. I loved that show, and I loved the characters. (This is not an endorsement. Parents, I would not recommend it for your kiddos).  I hated saying goodbye back in 2004. Even though the series had a happy ending with all the character’s stories moving in positive directions, I and millions of fans were still heartbroken. All of us would have loved for the show to go on. But it didn’t. The Reunion reminded us of that. In the show, Ross, Rachel, Chandler, Monica, Joey, and Phoebe took us on a trip down memory lane as they toured the old sets and reminisced about their time on Friends. And it was fun. The show was meant to be happy as the cast repeated famous one-liners and read through old scripts together. We laughed a lot during that 90 minutes.

But when the credits finally rolled for the last time on those characters all I felt was a deep sense of loss. It just didn’t seem right. I got up off the couch and paced the living room and stared out the window introspectively trying to pinpoint why this sitcom reunion show was making me feel like a mom dropping off her firstborn at college for the first time.

Don’t give me too hard of a time for my emotional reaction, though, ridiculous as it may seem. Most of us feel similarly when we reminisce or when something comes to an end. Maybe it is a child going off to college, or memories of your favorite summer from your childhood that bring up those “this doesn’t seem right” feelings. There is something deep within the human spirit that responds viscerally when things come to an end. I think I know why we do that. It’s what author Mike Cosper calls an “echo of Eden.” We always say the show must go on, but they don’t. In a fallen world all good things come to an end. Endings, even happy ones, trigger something deep in us because something deep in us knows we weren’t made for endings. We weren’t made for good things to cease. We weren’t made to grow old and die. We weren’t meant for goodbyes. We were made to go on forever in happiness and peace and joy. God has “put eternity into man’s heart” after all (Ecclesiastes 3:11).

But here in Genesis 3 world where sin and death reign there is a ‘time for everything;’ “a time to be born, and a time to die” (Ecclesiastes 3:1-2); a time for good things, and a time for good things to cease. That’s why The Reunion affected me so greatly. The passage of time was quite evidently written on the faces of those six actors and actresses, plastic surgeries and Botox notwithstanding. The show was in so many ways a painful reminder of the realities of life apart from grace. One line from the interviews that jumped out at me was how many of the cast members identified those 10 years as the best years of their lives. But that good thing came to an end 17 years ago. Now all they can do is look back and reminisce about the good ol’ days. Here they are now in 2021, 17 years older, 17 years closer to death, with the palpable sense that their greatest good is behind them. How profoundly hopeless is life in the land of time apart from grace.

As I stood in my kitchen introspectively staring out the window, I realized how easy it is to let that “echo of Eden” sense that we are not made for endings drive us to hopelessness. As my children grow, as I age (and continue losing my hair), as loved ones die, as the good ol’ days get older, it’s so easy to believe that my best is in the past, that time will win as endings keep coming. It was a rough Saturday afternoon, ya’ll.

But then, after a few more paces around the living room, my introspective heart remembered grace. The promise of God for those caught in a seemingly never-ending cycle of endings is that through the life, death, and resurrection of Jesus Christ that echo of Eden has been made again into reality. The promise of the gospel is that there will not always be a time for good things and a time for good things to cease. For one day, life in the land of time will itself come to an end, and those who have believed in Jesus will go on forever in perfect happiness, peace, and joy.

Yes, while you live under the clock your life will be marked by the endings of good things. But do not look back as if it holds your best. Do not lose hope. Your hope is seated at God’s right hand. Rest in Christ and trust that at his “right hand are pleasures forevermore” (Psalm 16:11). And one day all good things will no longer come to an end.